On February 8, 2021, I announced a 100 day quilt challenge in the artful Quilting and sewing facebook group.  Here’s what I learned.

As I researched 100 day challenge quilts I found many which involved making a block a day.  This would have appealed to some folks in my group but not to the majority.  Most of us like to quilt in more of an improv style with a contemporary feel.   I decided to leave the style of quilting up to each individual.  The only rule was that we would each do a small amount of construction each day and encourage each other to keep going.

I decided to make an architectural quilt based on this photo taken in Rittenhouse Square, Philadelphia during the winter of 2020.  This park is just a few blocks from our apartment and is a lovely oasis surrounded by tall buildings.  The setting sun casting a glow on the Liberty Towers gave me the idea to create the buildings using some very colorful fabrics. 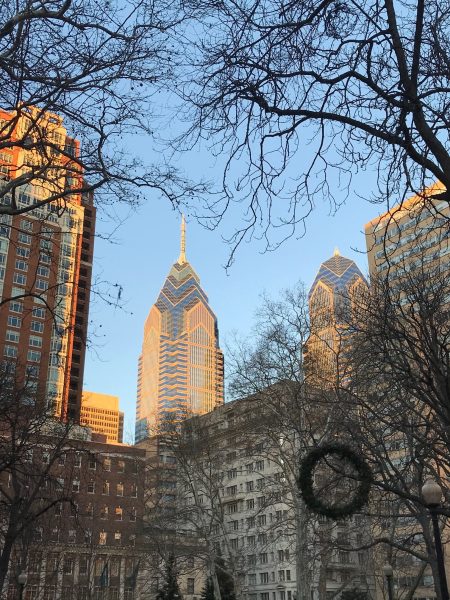 In order to create an image to scale, I enlarged it to the desired size in Photoshop, printed it out and taped all the pages together.  Taping sections of this to my window allowed me to trace portions of it on freezer paper with a Sharpie marker.  I then was able to cut buildings and rows of windows out with my rotary cutter.  All the fabrics were backed with Mistyfuse so I just fused them to the back ground with my iron.  I would create small sections on parchment paper as you can see below, then transfer it to the quilt background. 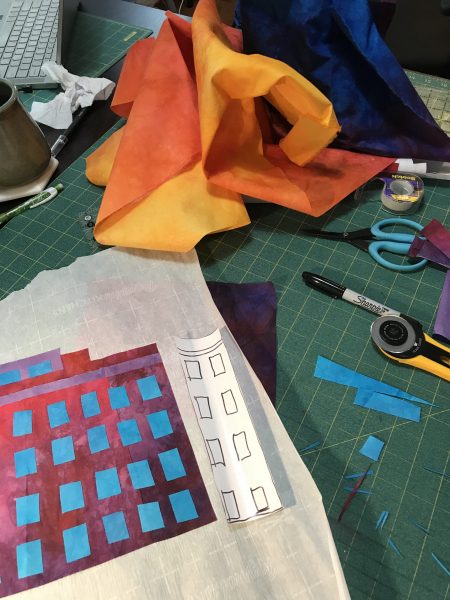 My background fabric is a Vicki Welsh Blue Sky gradient.  You may see more of her other lovely gradients here. 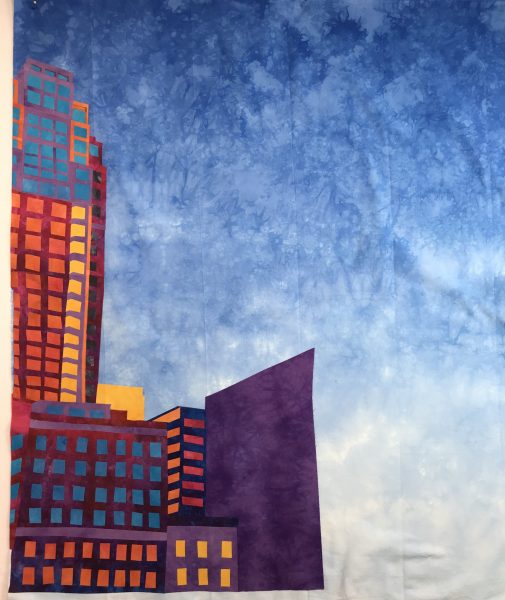 This quilt would have been quite tedious to create under normal circumstances.  The fact that I knew I only had to create a small portion each day made it extremely manageable.  In fact, I created this quilt in the midst of my most heavily scheduled teaching season to date.  Admittedly, there were a few days here and there which I skipped but I easily made them up by doing twice the amount of work on the following day.

So, #1 lesson: discipline yourself to create in small doses to keep creating even when you are incredibly busy! It’s not that hard.

I posted to Instagram and Facebook nearly every day so people could follow my progress.  It made for a seemingly monotonous feed at first glance but was also eye catching in that, I think, it made people check more closely out of curiosity. I got some comments from people saying they were enjoying watching the quilt take shape.  Each addition of a new building or the towers or the trees brought a new flurry of comments.  I had loyal cheerleaders in the Facebook group who would consistently comment and encourage.  These folks were so much appreciated!  I noticed others also solicited advise on their quilts and got many helpful comments from others in the group.

#2 lesson: ask for help or feedback in the group and use it as a source of talented advice or encouragement.

I decided to quilt this using the spiral quilting I’ve used in my other city quilts.  It just seems to give it the right amount of high energy required of a city scene.  I used the same colors of thread as in the various buildings and windows. 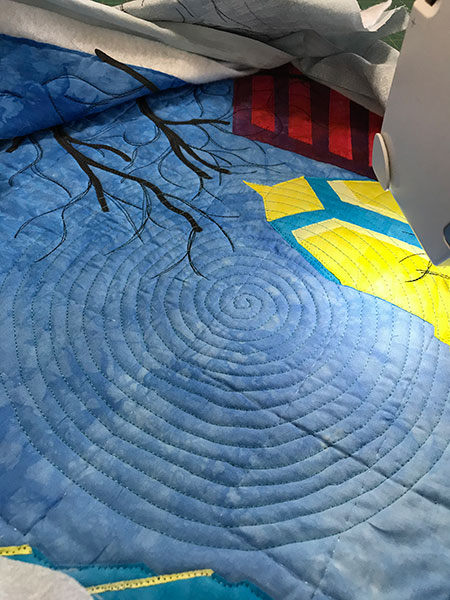 This kind of quilting can only be done on the domestic (small) machine since it requires a walking foot so there were a few wobbles from maneuvering the quilt under the small harp.  These wobbles were easily fixed later.  The abundance of fabric left unquilted after all the buildings were stitched presented a challenge.  I basted the sky with multiple basting lines but it was still challenging to keep the fabric from shifting as I spiral quilted.

The buildings were created with generally correct perspective but they were created with intentionally slightly wonky angles and lines.  I toyed with the idea of marking in many details with a Micron Pen but let that idea go when I realized that the design was already quite busy.  More details would have been appropriate in a very perfect design but this was far from perfection.  That’s not was I was going for.

I like to create a feeling in my work.  The overall feeling in this work is that I love the sense of vibrancy in this block of the city, even in the dead of winter.  There is culture and life all around you as you listen to all the languages being spoken as people walk by.  Traffic bustles around the square.  Farmers sell their produce and people walk their dogs.  It’s a great place to hang out when you need a little break from being inside all day.

I made a little fast paced video which shows the progress over the span of the 100 day quilt challenge which you may see here.

You may see the listing for this quilt here.