Inspired by the Appalachian Trail

This work is a response to my recent visits to various points on the Appalachian Trail.  Our daughter, Liz, is traversing the trail from Georgia to Maine this summer as a supported thru-hiker.  She originally was going for the Fastest Known Time record but shin splints got the best of her and slowed her down too much to meet that goal.

Nevertheless, she persisted, putting in incredibly long days of hiking rather than running.  She now heads into Vermont with a goal of completing the trail in under 50 days with her support crew.   We took her provisions and shoes as she made her way through Virginia, PA, and New York.  As we hiked short distances into the woods to meet her we found ourselves in such a world of beauty.  After being mostly indoors through the pandemic it was so lovely to be out in nature.

I chose a beautiful hand dyed fabric of greens and blues from Lisa Reber for my background.  Her fabric invokes my imagination so much!  I think this was a piece which was cut off when making an earlier work because it was a very skinny vertical piece, only 17″ wide.  I chose to put the blue at the bottom to represent a stream of water.

I made the caladium leaves by first painting some Pellon 830 Easy Pattern tracing cloth with a thin watered down coat of yellow and blue textile paint.  I made sort of a bulls eye in the middle so that I could place my cut out caladium leaves with part of them having some yellow. I also painted another piece with just green paint. 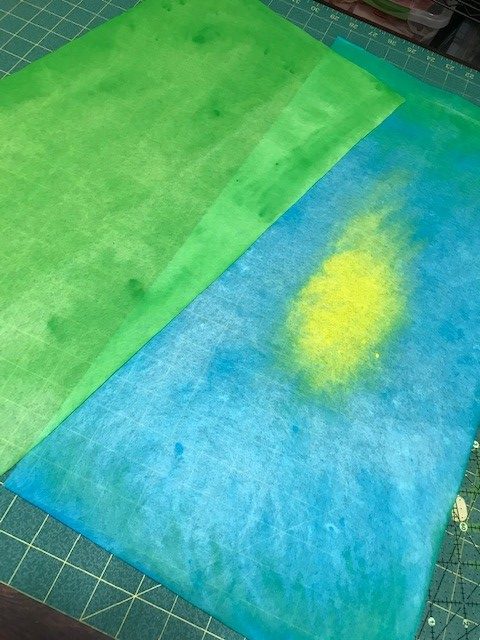 I cut the caladium leaves out of the green with my Cricut cutter.  I drew this leave with marker, photographed it, modified to black and white in Photoshop, then loaded it into the Cricut software.  Mistyfuse was ironed to the back of both of these sheets before cutting. 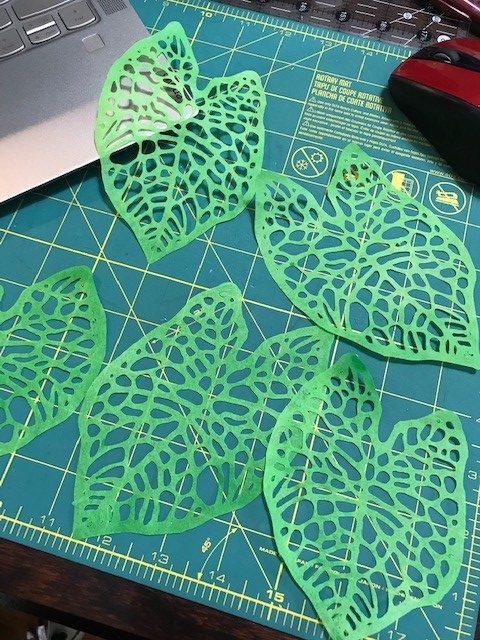 The two layers were fused together between sheets of parchment paper, then pinned to the background. 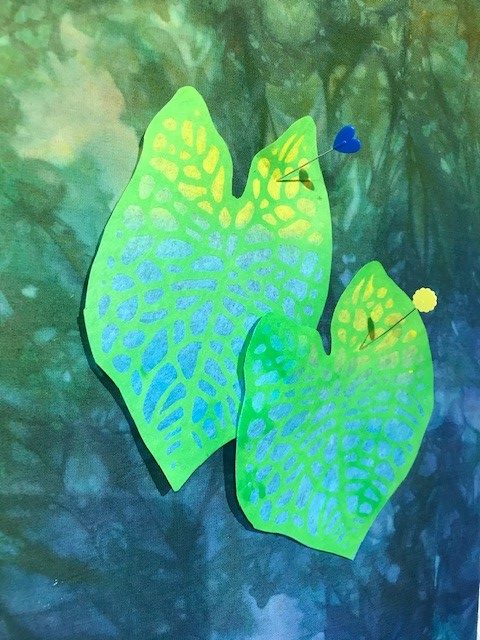 My ferns were created by scanning actual ferns before loading the image into my Cricut software.  They did not fare so well through the cutting process.  I first cut them out of the Pellon 830 and later tried cutting them out of Evolon.  Both times they just got shredded, even with a new blade in my machine.  I was able to splice them together and cut some parts out with a small scissors to salvage them, though.  Needless to say, I ordered some new cutting mats.  Mine were clearly worn out. 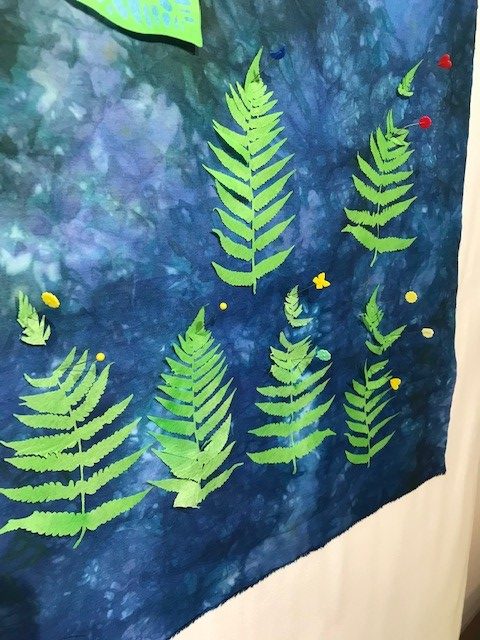 I had some Evolon which was already painted dark red, medium red and one piece that was orange so I used those for my maple leaves.  This time I was able to manipulate my maple leaf bough image so that it looked like you were viewing it from that side rather than directly from over the top.  I was thrilled with how they looked from this perspective. 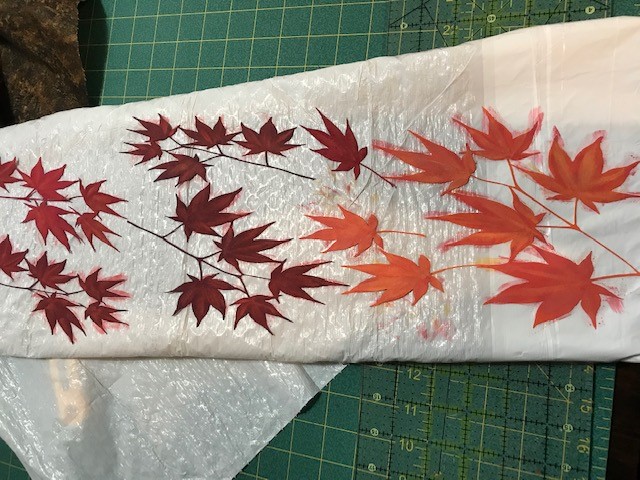 The painted leaves were very flat looking so I got out my inktense blocks and did some shading on them.  They took an extra night to completely dry out.

I chose to use my usual Northcott Stonehenge fabrics for tree trunks and rocks.  The orange flowers were just fussy cut from a batik fabric that I had.

One important step I took was to quilt the background after only the trees and rocks were fused to the background.  That way I didn’t have to maneuver around all those little ferns and leaves!  After the quilting was done, I fused the rest of the foliage and quilted it down.  I just steamed them while the quilt was still loaded on the longarm machine.

Here are some detail shots. 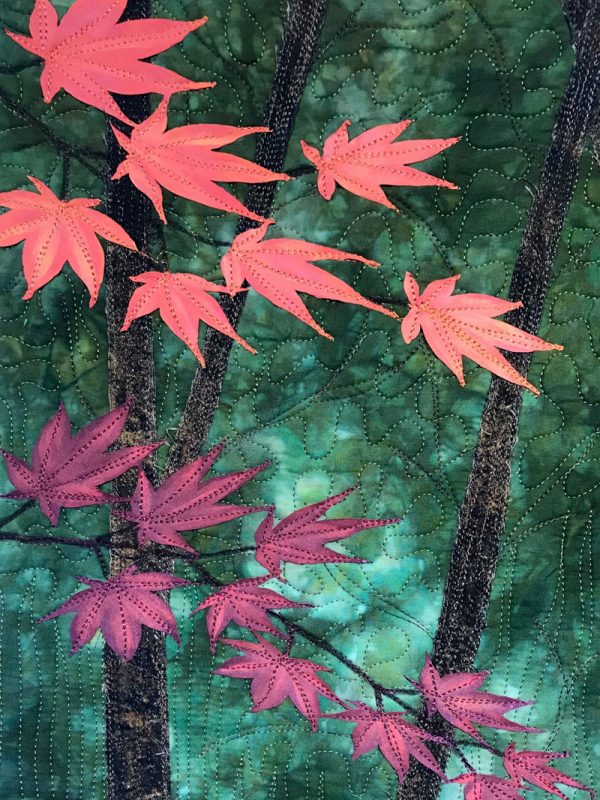 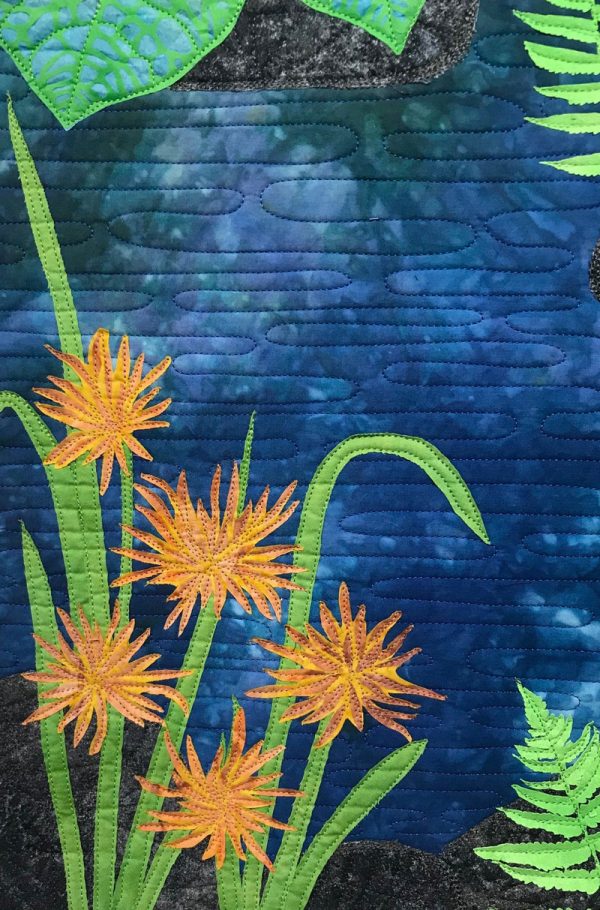 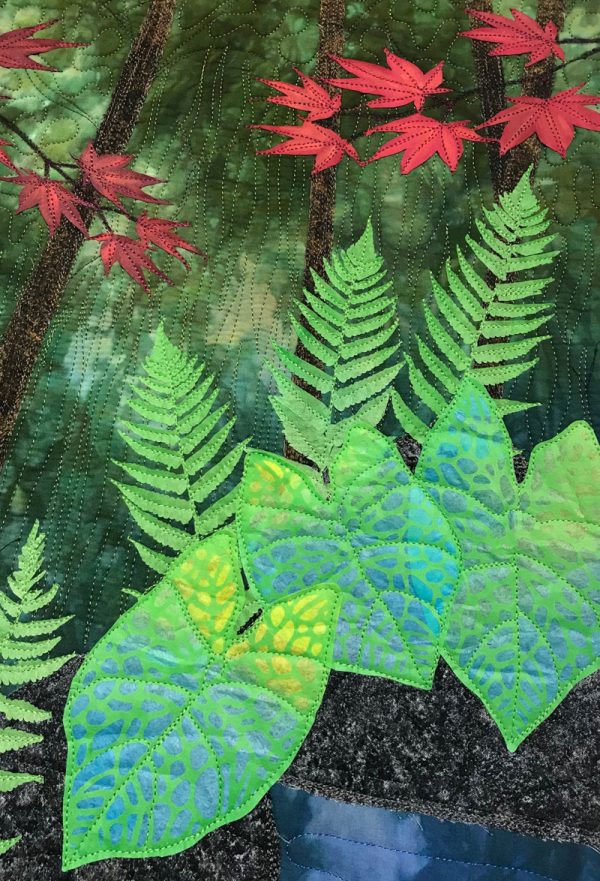 My landscape art is more fantasy world than true realistic representation.  I enjoy bumping up the colors and using foliage from diverse climates and seasons.  They are simply celebrations of nature.

Sew a Summer Top with Me

Dressmaking Fashion from the Past