Dressmaking Fashion from the Past 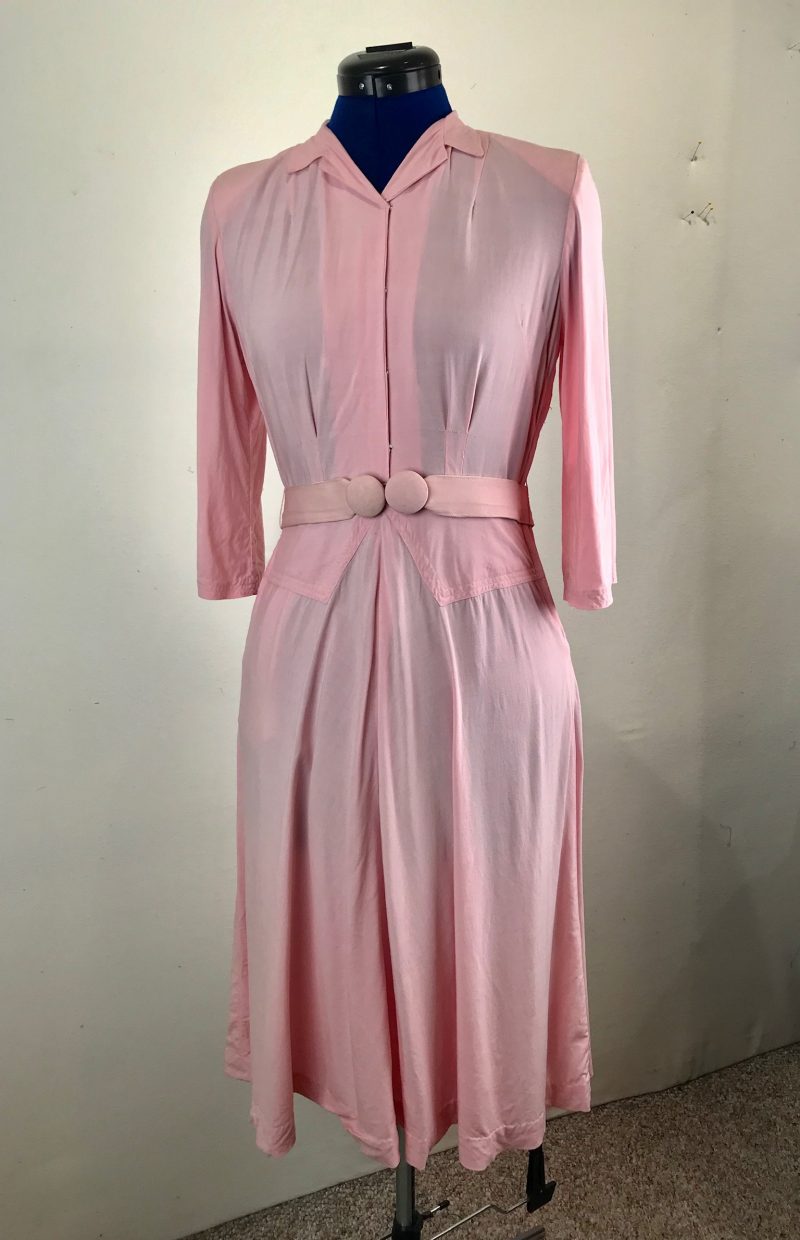 I have been purging closets and drawers and have discovered a treasure from the past this week.

One of the bags of linens through which I was sorting contained a garment made with excellent dressmaking techniques.  I have no memory of how I came into the possession of this dress or to whom it originally belonged. 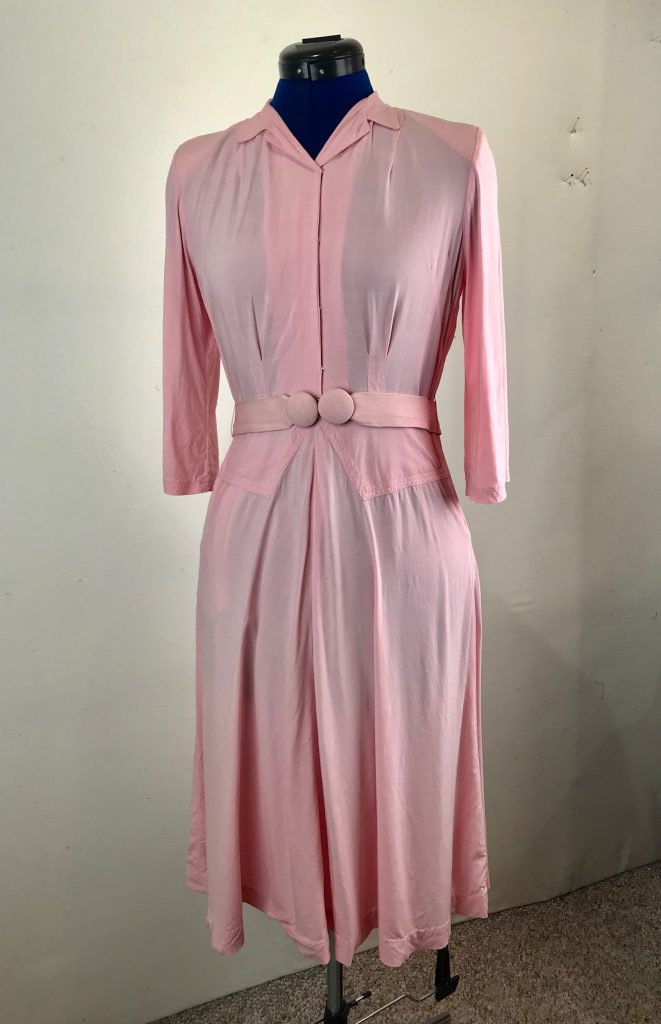 I started ironing the dress when my iron suddenly decided to die on me and dripped rusty water on the sleeve of the dress.  Yikes!  Needless to say, I rushed out to buy another iron.  After washing the dress with Oxiclean and a Color Catcher sheet I adjusted my dress form to the absolute smallest size and barely was able to get the dress onto it.  This is an incredibly tiny dress!  I was, of course, scared to iron it, so just let it dry on the dress form.  The tiny size leads me to believe this belonged to my mother-in-law, Alma Derstine, who was very petite, but I am not absolutely sure.  It was in a bag with linens from my own mother but I don’t think my mother was ever this tiny.

Alma was an expert seamstress.  You can see her here in a photo taken while she was shopping in Philadelphia. I’m quite sure she made the dress she was wearing. 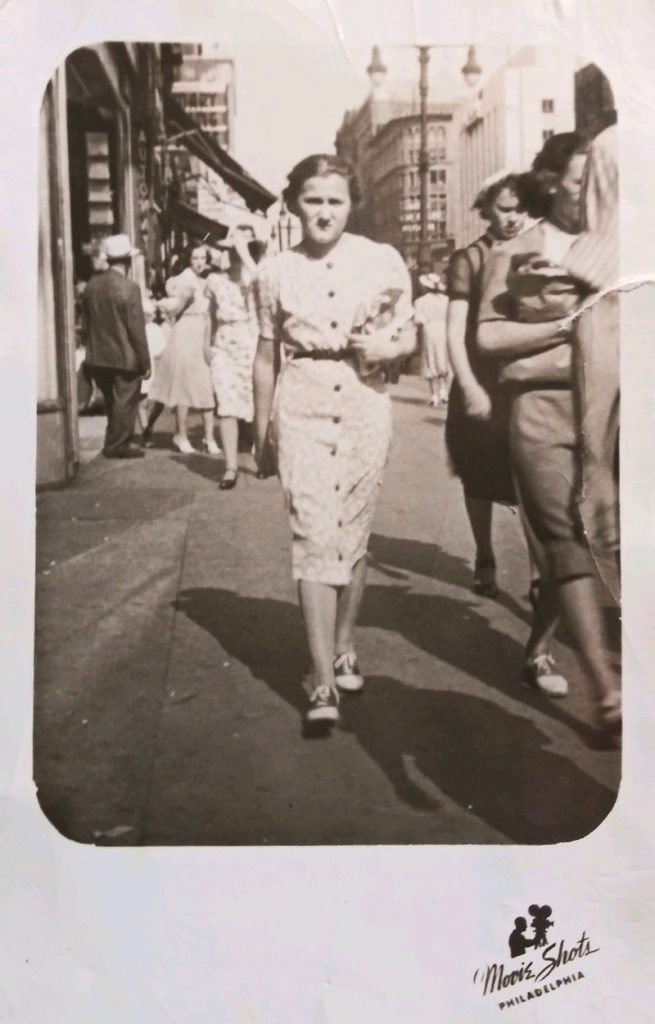 She and I shared a love for sewing and she also taught me to hand quilt.  I remember her telling me that sometimes her first thought in the morning upon waking was the great anticipation of what she would be sewing or quilting that day.  She felt guilt about how much she looked forward to it.  I don’t understand the guilt but I very much identify with having the great anticipation. I think sewing and quilting are therapeutic in many ways.  Creating with your hands can calm a multitude of ills.

This fabric is a pink rayon with a nice hand and drape.  What struck me the most was the maker’s attention to detail.   There are three rows of top stitching along the sleeves and yoke at the waist.  These stitches are super tiny and perfectly straight. 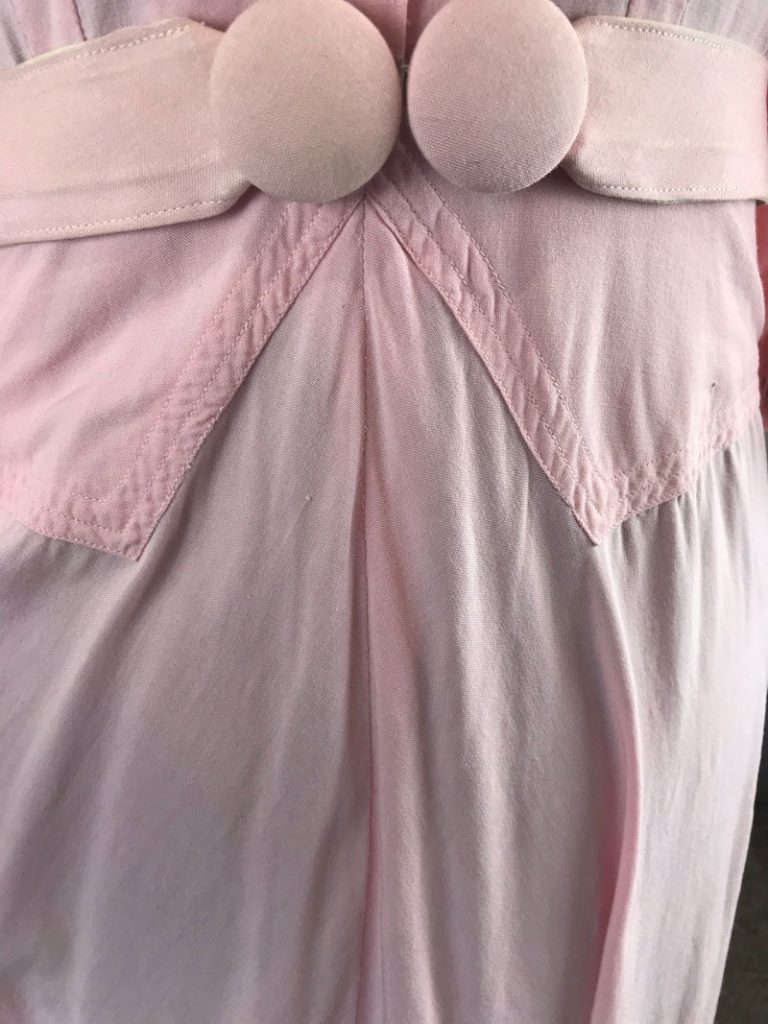 I didn’t wash the belt for fear of creating more rust from the hooks and covered buttons.  The dress must have shrunk over time because the belt is considerably larger in circumference than the dress. 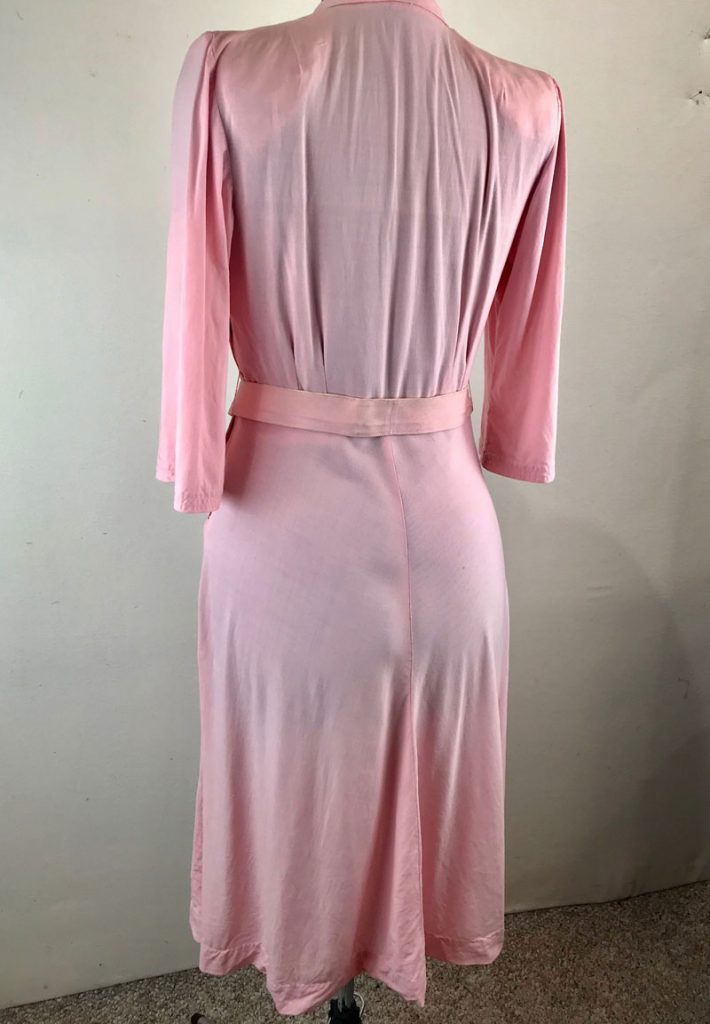 The shoulder pads are handmade and snap into the shoulders of the dress. 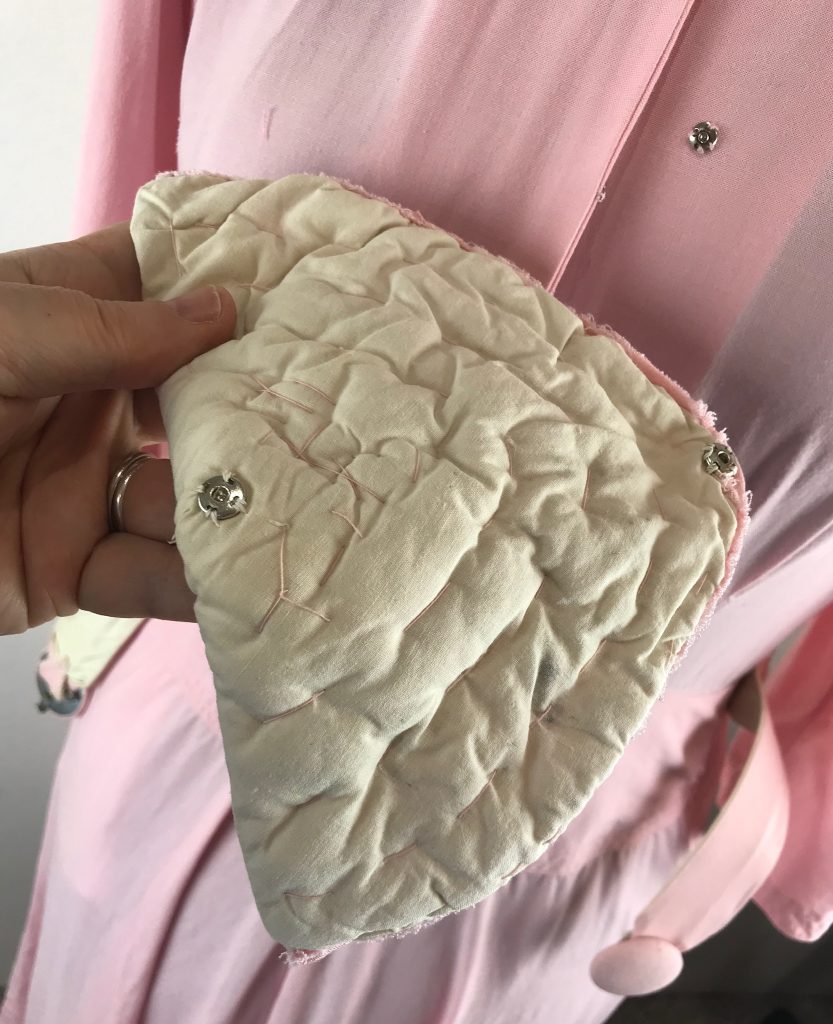 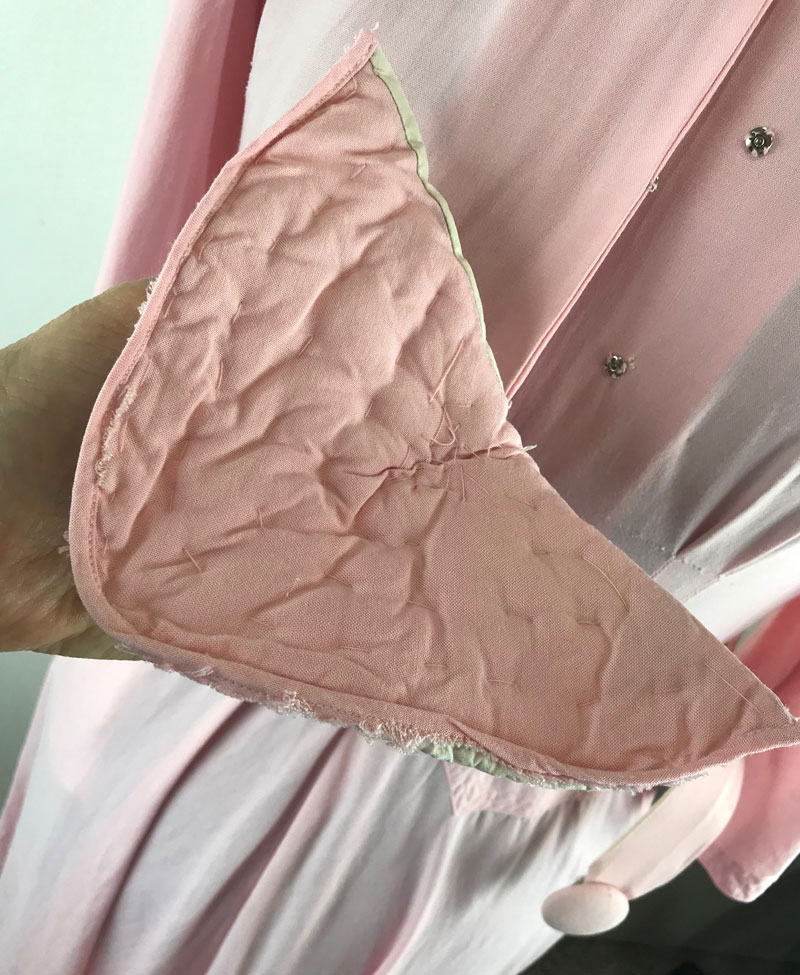 There is a side zipper installed with crochet belt loops on both sides and a pocket inserted into the side seam on the opposite side from the zipper. 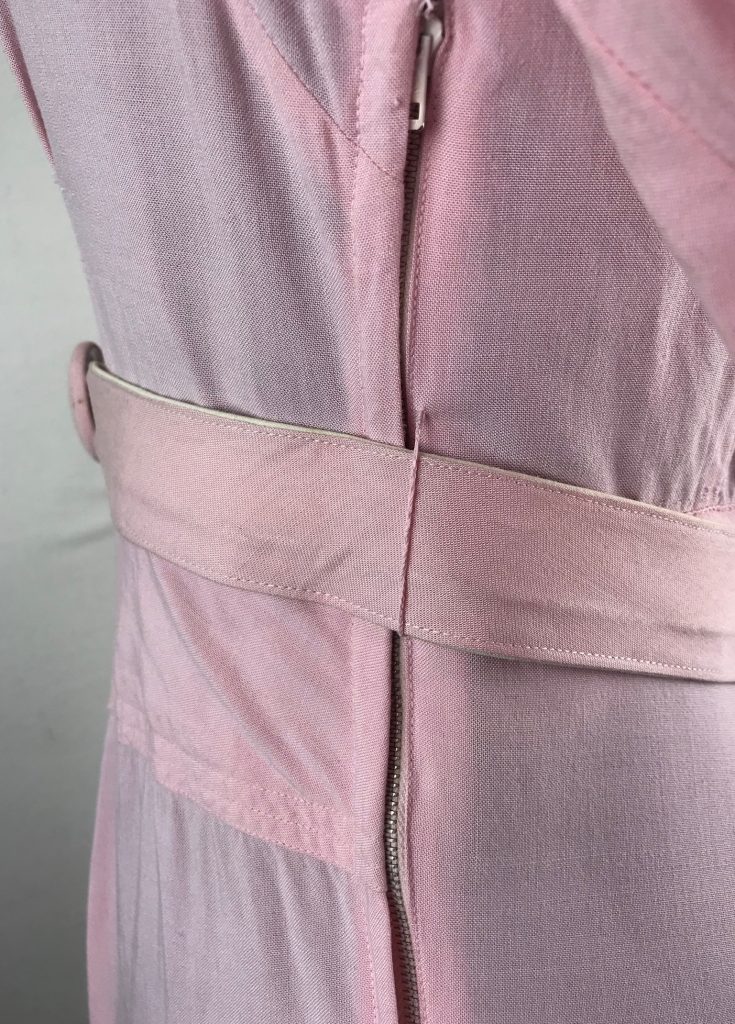 The last clue of the mystery dress is that the maker used snaps instead of buttons to fasten the front opening of the dress.  That is often the sign that the dress was made by a Mennonite. Buttons were sometimes considered too trendy. My mother was an Iowa Mennonite and my mother-in-law was a Pennsylvania Mennonite but I doubt that either of them were too conservative to wear buttons. The belt had covered buttons, after all.  The other possibility is that there may have been covered buttons which were removed before washing.  Perhaps she didn’t want to make buttonholes?? 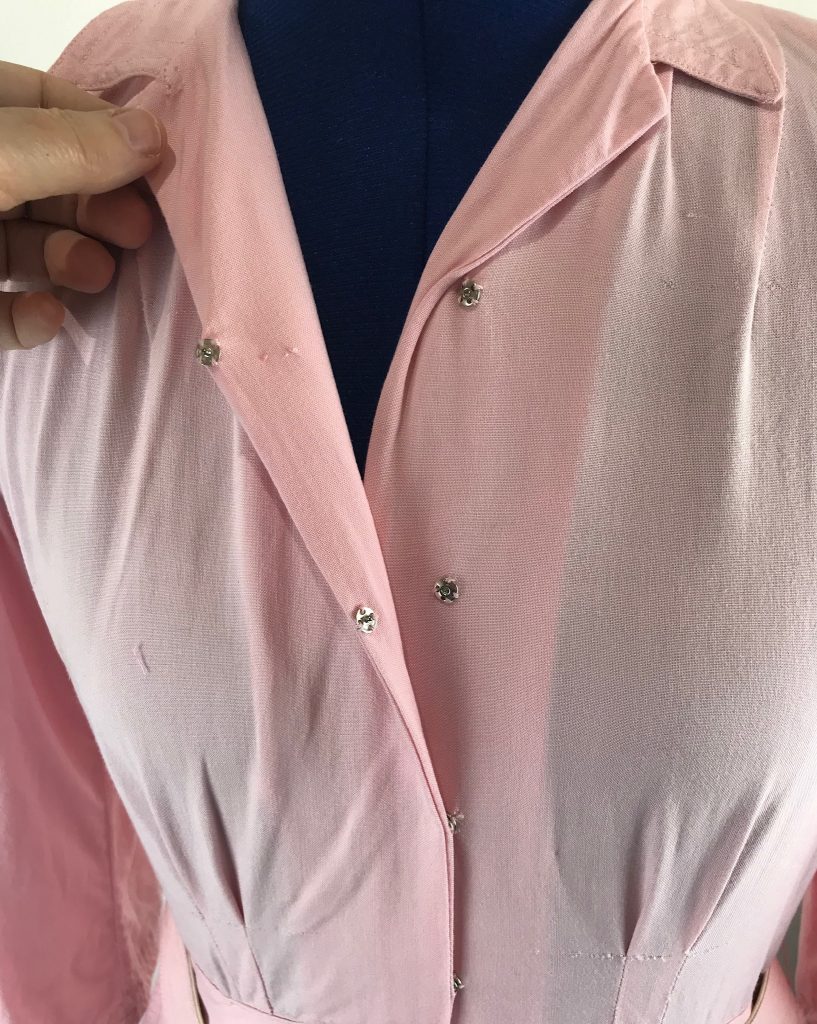 Another thought I had was that this dress looked very much like my mother’s wedding dress in style.  My parents, Eugene Blosser and Louella Gingerich,  were married in Hong Kong after my mother had spent a year as a single missionary in Sichuan, China, and my father had stayed behind in the US to finish his seminary degree.  She flew to Hong Kong to meet his ship and they were married there. They found an Episcopal priest who agreed to perform the ceremony since there were no Mennonite churches there at the time. 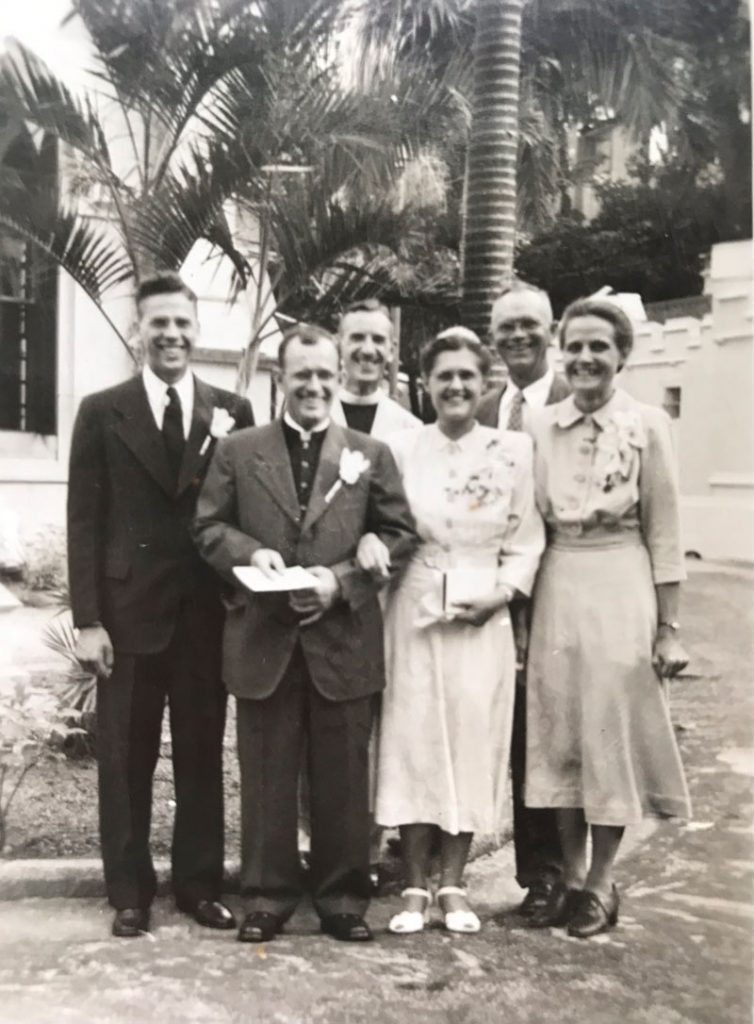 She had taken one of her favorite dresses to a dressmaker to have her wedding dress made in the same style and size.  I remember her telling me about her chagrin when she went to pick up the dress and found that the dressmaker had sewn patch pockets on the front of the dress, just like the original!  The fabric of her dress was also a pale pink but was satin or silk, I think.  You can see here, that the style of her dress was remarkably similar to the dress in my possession but it had buttons on the front and a rectangular covered belt buckle.  You cannot even notice the patch pockets on this image.  She was wearing a traditional covering on her head.  I also remember my parents telling me the Episcopal priest had quite an issue with the fact that they didn’t wear wedding rings.  He had never heard of such a thing, but jewelry was taboo for Mennonites at the time.  I do love her shoes!

They spent a few days honeymooning and then returned to Sichuan Province, China where they lived for another year or so and where my oldest brother was born.  They left China in 1949.  They went on to Japan in 1953 where I was born and we lived there until around 1969.

So that’s my trip down memory lane.  I think the whole story of the two dresses is pretty remarkable.  I’m sure some of you might have more memories or comments to add to this story and I’d love to hear them.

PS – Join our FREE Facebook Group to find supportive like minded people who love to quilt and sew.

The Importance of Contrast